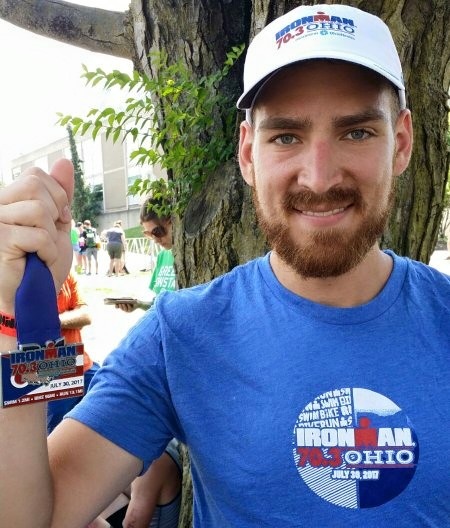 After completing my first Ironman 70.3

Well I did it. I mentioned in my previous post that it had always been a dream of mine to compete in a triathlon. I completed my first Sprint distance triathlon last September and wanted more. I was out of shape and rocking a dad-bod. This challenge was twofold. It would help me get in shape and it would help me accomplish some of my life goals. That was what I thought initially, but it ended up being so much more.

The four most common distances in Triathlons are:

As I mentioned earlier, I did a Sprint distance race last September. I had just bought my bike earlier in the year and I thought that race was rough! I signed up for an Olympic distance race at the end of June this year, but unfortunately, the swim portion of the race was canceled due to flooding. I still competed in the duathlon, but felt like it wasn’t a full race.

I had signed up for the Ironman 70.3 Ohio back in December of 2016. At that point I had only one Sprint under my belt and I thought my sanity had lapsed. One of the things that this experience has taught me was discipline. I’ve never been a particularly disciplined person. My friends know that I am more of a “fly by the seat of my pants” type. I was so nervous about my race, that all of that changed. I started planning each and every week around my training schedule. I said no to plans on Saturday mornings that would interfere with my long workouts. I left events early so that I could get to bed on time. This experience really changed me in ways beyond fitness.

When July 30th, 2017 (Race Day) finally came. I had an odd sense of calm. I woke up before my alarm went off at 4am and started getting ready. Coffee was already waiting for me downstairs and I ate a nice breakfast before heading to the race start. We had to be out of T1 (Transition 1, swim to bike) by 6:45am, but my wave didn’t start until 8:12am. So I had a lot of time to kill. I hit the porta-potties multiple times and made friends with some of the more veteran triathletes.

As my wave time neared, I put on my wetsuit and got ready. (I was very happy they announced at 5am that the race would be wetsuit legal by .2 degrees!) I assumed that I would be part of the slow group. So I lined up in the very back. This was my first mistake of the race. Swimming in a huge group is difficult enough, but trying to maneuver around people and pass them is even more difficult. After the first turn, the swim headed directly into the sun. This made it almost impossible to see the buoys. So my swim was all over the place and added a couple hundred extra yards to my 1.2 mile swim.

When I ran up the beach into T1, it was already mostly empty due to how late my wave was. I hopped on my bike and took off for the 56 mile bike ride. The weather felt great and I had remembered to actually kick my legs during the swim. So they were warmed up for the bike. This was my first experience with biking aid stations. Trying to grab a water bottle from someone while you are going 15 mph on a bike can be pretty difficult. Luckily, I didn’t wreck! I started to feel a little fatigue in my legs around mile 46, but pushed on. At mile 50 while going down a big hill, my chain popped off. I had to pull off to the side and put it back on. I quickly finished the last 6 miles and headed into T2.

As I sat down to put my shoes on at T2, I was already tired and I could feel the mid-day sun blasting down on me. It had gotten hot and the temperature was almost 90. The run was brutal with very little shade and I hit a wall at mile 2. I had to run-walk the rest of the half marathon and was disappointed in myself. The run seemed to drag on forever at my slow pace, but the other athletes were so encouraging. Everyone I saw was also doing a run-walk due to the heat. When I finally was on the last mile heading back to the stadium, I got a second wind. I knew my family was waiting to cheer me on and when I finally saw them my heart soared. I sprinted around the stadium track to finish.

A wave of relief washed over me. I almost felt like crying. I had trained so hard for this and I did it. I completed it. Unfortunately, I missed my goal time by 9 minutes due to my very slow run split, but I finished. It just means that I will have to come back next year and do even better!

I always used to believe that people that competed in these endurance races were crazy and superhuman. I didn’t think that I would ever be doing one, but now I have. It just proves the old mantra that you really can do whatever you set your mind to. You just have to have the self-discipline. So get out there. Set a goal. Then crush it!