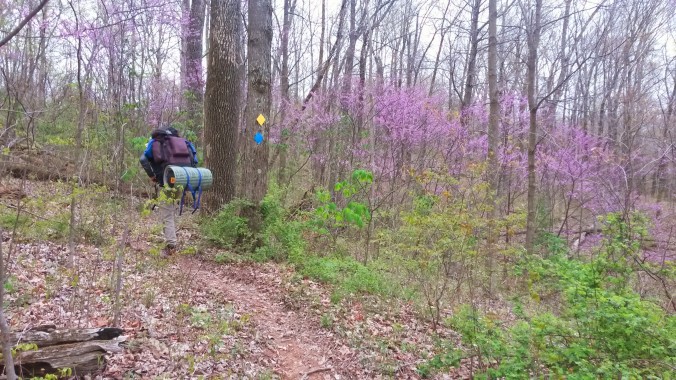 *This is a continuation of a previous article which can be found here.

The next morning I naturally woke up around 7am. The tent was chilly and I could hear rain lightly tapping against the rainfly. Today’s forecast had a 65% chance of rain and only called for light, intermittent rain until the early evening. I rolled over and went back to sleep, opting to wait out the early morning rain rather than try to get an earlier start on the trail. At around 9:45 am the rain eased up and I could just hear drops falling from the trees above us. I waited for most of it to stop before waking Kevin. We made a delicious breakfast of instant oatmeal and Poptarts © complete with hot coffee. True to my style of always carrying too much gear, I had a backpacker’s French Press coffee maker with me. The delicious coffee was worth it. 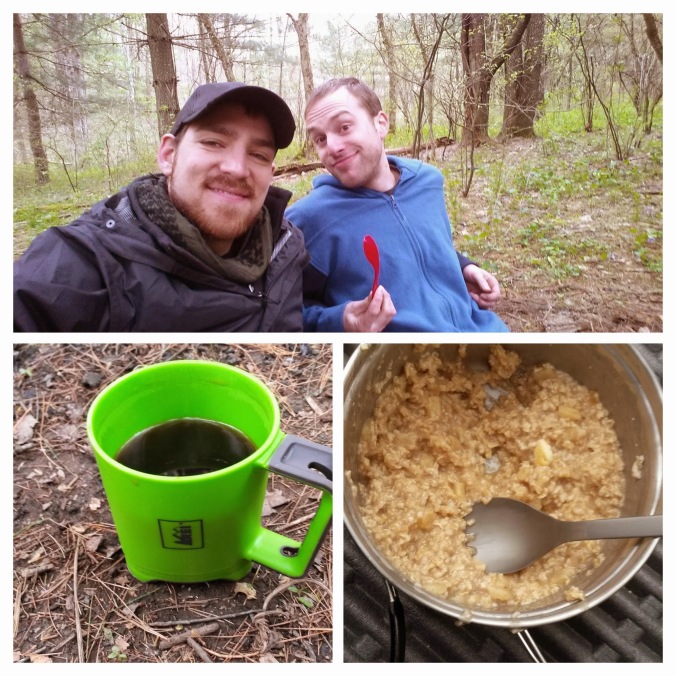 On the Trail Day 2

We had a pretty leisurely breakfast and then decided to break camp. Kevin cleaned up the breakfast dishes while I cleaned up camp and starting packing up our gear. We disassembled the tent and finished packing all of our gear. The temperature was still only in the upper 30s. So we had on most of our warmer gear. This freed up a lot of space in our packs. It wasn’t until almost noon that we finally got on the trail (one of the latest starts I’ve ever had on a backpacking trip). I wasn’t concerned though, since we only had about 10 miles of hiking to do today and we didn’t need to leave until Sunday.

For this being his first trip, Kevin continued to surprise me with his quick pace, especially with his large pack on. Soon we reached Archer’s Fork Creek and needed to cross. The frequent rain had caused the water level to average between two and three feet deep and it was about fourteen feet wide.

I found a small island and hopped out to it. From there, I was able to walk through a couple shallow points and utilize some larger rocks to help me get across. Kevin didn’t trust the waterproofing on his boots quite as much as I did. So he spent some time traveling up and down the creek looking for a place to cross. Meanwhile, I sat on the other side of the creek and relaxed while I snapped pictures of the creek and Kevin’s dilemma. We lost a bit of time with this creek crossing, but still weren’t concerned. Finally, he was convinced that I had found the best place to cross. I tossed him a large stick that I had found to help him vault from the island to the other side. 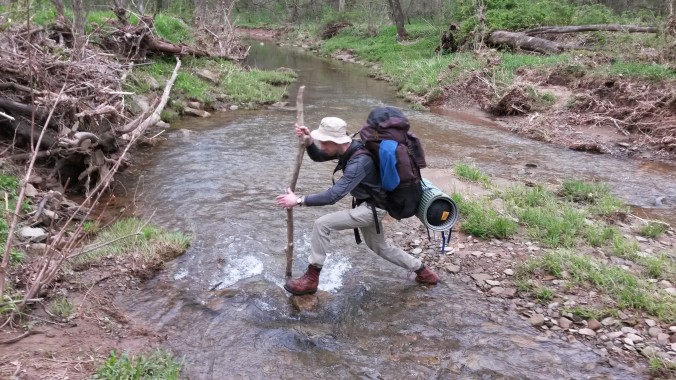 Once he made it across, we had to backtrack along the creek to find the trail again. We located the blazes after fighting our way through a thicket of thorn bushes. The trail quickly climbed from the lowest point on the trail to almost the highest. It was about a 500 foot climb and we had to take a few breaks on the way up. Of course I claimed that it was to take pictures, but my quads were on fire and my fifty pound pack felt like a hundred. 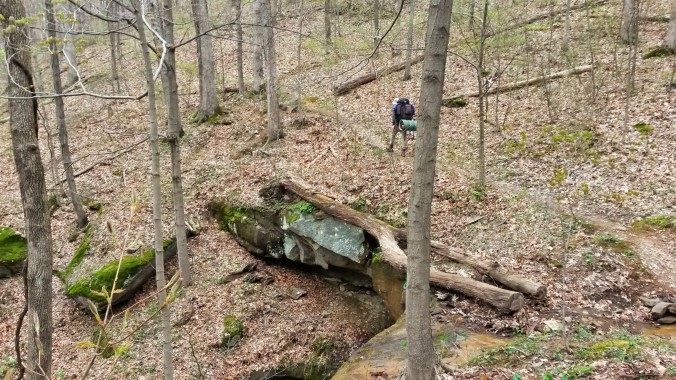 We made it to the top of the hill and thankfully, the trail leveled out for a bit. Kevin opened a bag of beef jerky and we enjoyed it as we walked along a wider than usual path side-by-side. Our discussion turned to growing up and how we both had similar backgrounds as very hyper children. The path soon turned and headed back down into the woods. Just about this time a light rain started. We decided to press on without stopping to put on rain gear since the trees now mostly protected us from the rain. Once we reached the bottom of the hill that we had just struggled to climb, we found a nice camping spot and decided to stop for lunch. We sat under some pine trees and feasted on the most amazing tuna and crackers we had ever tasted (everything tastes better on the trail). 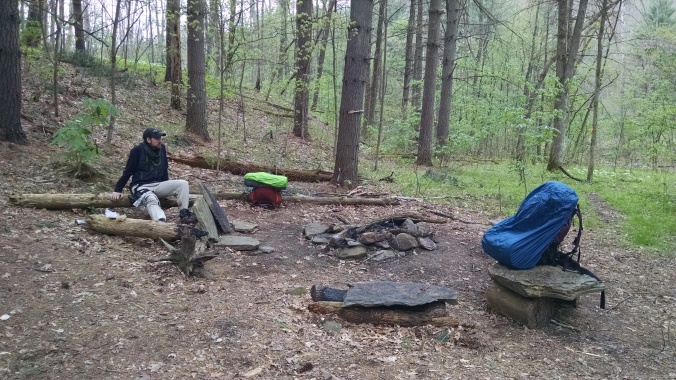 At this camp site, we took the time to put our rain covers over our bags and don our rain jackets. The rain didn’t look like it was letting up so we wanted to be prepared. With the temperature in the low 40s, getting wet could quickly mean hypothermia. 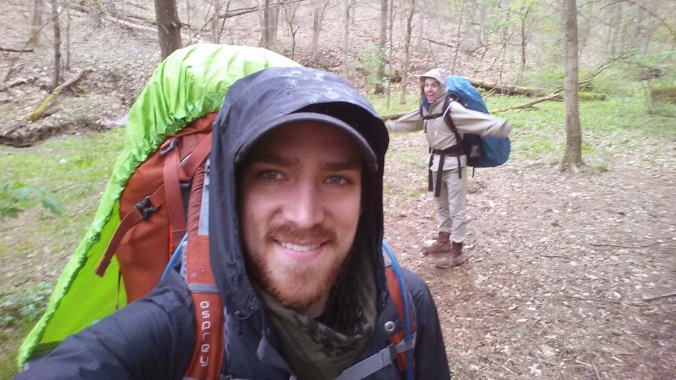 The path quickly took us back into an uphill climb as the rain continued to come down. It grew in strength and there didn’t seem to be an end in sight (so much for light, intermittent showers). We trudged on through the rain in steep elevation. The rain made the paths muddy and slippery. It also sapped our strength, but even so, there were still some great sights to see and we kept our spirits high. 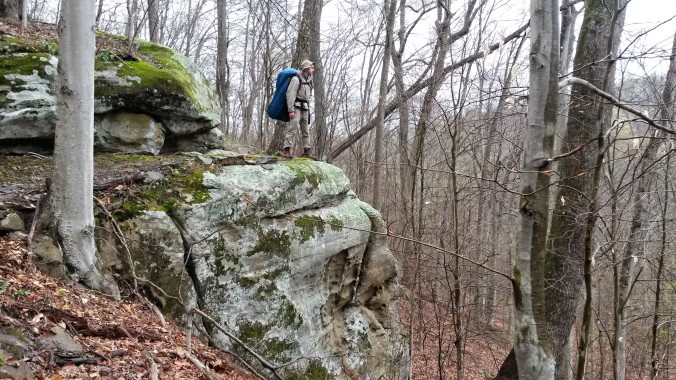 The trail winding around a cliff

Although, the weather was still cold, our added rain gear and constant movement caused us to sweat. Rain continued to come down and soon we were completely soaked. The trail continued with multiple PUDs (Pointless Ups and Downs) leaving us completely exhausted. We had been on the trail for about three hours since lunch and the rain still had no end in sight. We stopped to refill some of our water bottles from a creek for dinner. If we ever found a good campsite, we would want hot meals. An hour later found us at the top of yet another peak huffing and puffing for air while every inch of our body was saturated by a combination of rain and sweat. I was wearing premium rain gear, but even it could not stand up to the hours of steady wetness. Our bodies cried out for rest and we both collapsed on a log without taking our packs off. Kevin leaned forward onto his hands and promptly fell asleep despite the continued rain. I stared at my soaked, pruny fingers and wanted nothing more than a towel to dry them off with. I leaned back against my pack for support and let the rain fall against my face. My mind pondered the events that had led us here and everything we had been through. Never had I been so completely saturated on a backpacking trip and I silently wondered if Kevin was regretting being talked into this. Despite the conditions, I had no regrets (except maybe not upgrading my rain gear). I was happy in the moment with nothing else on my mind. 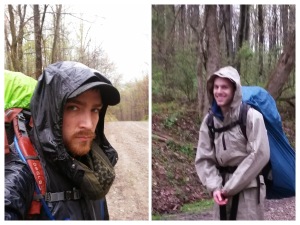 After about a half hour, Kevin woke up and I urged us to continue on to prevent hypothermia and to try to find a suitable campsite. The nap must have done him wonders, because he continued down the path with renewed speed. Even so, it was still slow going with the trail conditions combined with the elevation changes. We passed a couple possible campsites, but due to their locations, most of them had standing water. It was almost 6:30pm. Our strength had faded; sapped by the pouring rain, the hills, our packs, and the fact that we hadn’t stopped again for food. We didn’t want to risk our packs getting even more wet. I’m sure we would have looked like a sorry bunch if there had been anyone around to see us. As we trudged on we entered a state that I’d refer to as “zombie-mode.” There were no thoughts going on in our heads. We weren’t looking around. We weren’t talking. We were simply putting one foot in front of the other… over and over and over again. If any thoughts did cross our minds, it was usually us wondering if we would ever be dry again…

There was an error retrieving images from Instagram. An attempt will be remade in a few minutes.